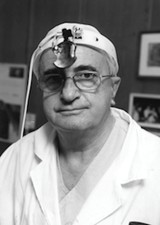 It is with immense sadness that I inform the members of the EHNS of the passing of an outstanding laryngologist - Professor Zygmunt Szmeja.

Professor Szmeja was trained in Poznan, Poland and at the very young age of 22 received his PhD from the Poznan University of Medical Science. In 1979 he became Professor and Chairman of the Department of Otorhinolaryngology at the Poznan University of Medical Science. He held this position for 21 years. He gained his professional experience during internships abroad in London, Geneva and Zurich. He was a member of multiple scientific and professional societies, including the American Academy of Otolaryngology, the European Laryngological Society (ELS), and The Royal Society of Medicine in London. He was also an Honorary Member of the Polish Head and Neck Society, and the German, Lithuanian and Hungarian Otolaryngological societies. He was a member of various editorial boards. He has edited numerous proceedings and books and authored more than 600 publications in international journals and book chapters focused mainly head and neck oncology and laryngology. Professor Szmeja was the supervisor of 25 completed doctoral dissertations and patron of 5 post-doctoral dissertations. He received many decorations and awards: Commander's Cross of the order of Polonia Restituta (1998), Medal of the National Education Commission (1983), Knight's Cross of the Order of Polonia Restituta (1973), Golden Academic Laurel of the Poznan University of Medical Sciences (2010).
Professor Szmeja always impressed me with his vast knowledge, experience and incredible work ethic. Work filled all of his days, including Saturdays and Sundays. I quickly realized that this knowledge and experience are a combination of hard work and talent - a recipe for success. He was open-minded, always ready to discuss his ideas with opponents, convincing them to accept his arguments in a substantive and factual manner. He was always thinking 20 years ahead, which allowed him to be extremely innovative.
Professor Szmeja was an undisputed authority for his fellow professors, residents and students. He was an open and sociable person, who liked feasting with his friends. His witty comebacks and humor were greatly admired. In everything he did, he tried to help people.

He will forever be in our memories.